When it comes to making computer peripherals, few names are bigger than Logitech. I recently got my hands on a pair of their devices, the K811 Easy-Switch Keyboard and the T651 rechargeable trackpad for Mac. If you’re looking for a new keyboard and trackpad set for your Mac, listen up. This might be the set for you.

Both the K811 and T651 are Bluetooth connected. You wouldn’t know it by using them though; after using them for a couple of weeks I have not had any sign of a disconnect or slow down. Integration to the Mac is via the Logitech Preference Manager control panel. It’s slightly disappointing that Apple doesn’t allow native support to the system trackpad and keyboard control panels for third party devices. The choices available to the Logitech pair pretty much exactly mirror Apple’s own control panels.

Both have a proprietary internal battery that is recharged using included Micro USB cables. You won’t be using them very often. The trackpad lasts about a week and while there isn’t an in OS X notification about being on low power, the multi-color status LED will blink red when you have a day left before you need to charge. As for the keyboard, I don’t honestly know how long it runs on a charge because in over two weeks of use it’s still showing 2/3rds of a charge. I think going with the internal batteries over the AAs Apple uses in the Apple Bluetooth keyboard has some advantages. If you’re worried about the battery life at all, there’s an easy to use on-off switch on the sides. They reconnect in just a couple seconds.

If there is a design weakness with these, it’s that they lay completely flat. There are no kick stands to raise them to a more comfortable angle. For some users, this could be a major issue. It’s a major fail when it comes to ergonomics.

This is the best keyboard available to Apple users, review done. Well, not quite, I should be telling you why I said that. It has a couple of features that no other Bluetooth keyboards on the Mac have. First off, like the keyboards on the MacBooks, they keys are backlit. This helps when using it in lower light. It’s also not just a Mac keyboard. The reason they call it easy switch is because it can save pairing to three different devices and switch between them using three keys. One can be set to your Mac, another for your iPad, and the last one for your iPhone or AppleTV. The last one is not officially supported by Logitech, using the latest AppleTV firmware with BT support, the AppleTV recognized, connected to, and worked with the Logitech without a hitch.

As cool as those features are, the primary job of any keyboard is to provide a platform to type. Depending on your hand size, there might be some adjustment time. From caps lock to return (for those new to the Mac, there is a difference in function between return and enter), the Logitech is a bit wider than the keyboard on my Retina MacBook Pro. I wear a men’s medium glove and it took me a week to truly get used to the keyboard. I’m also feeling a bit of soreness from my hands having to constantly stretch more than they’re used to. For small to medium sized hands or those with lower than average dexterity, this might be an issue. Those with larger hands will find no issues. In fact, this might feel a bit more comfortable than typical portable keyboards which might feel cramped. The keys are also a bit stiffer than the keyboards on the current line of MacBooks. I prefer lighter keystrokes myself, but there are a lot of users who might prefer the Logitech. 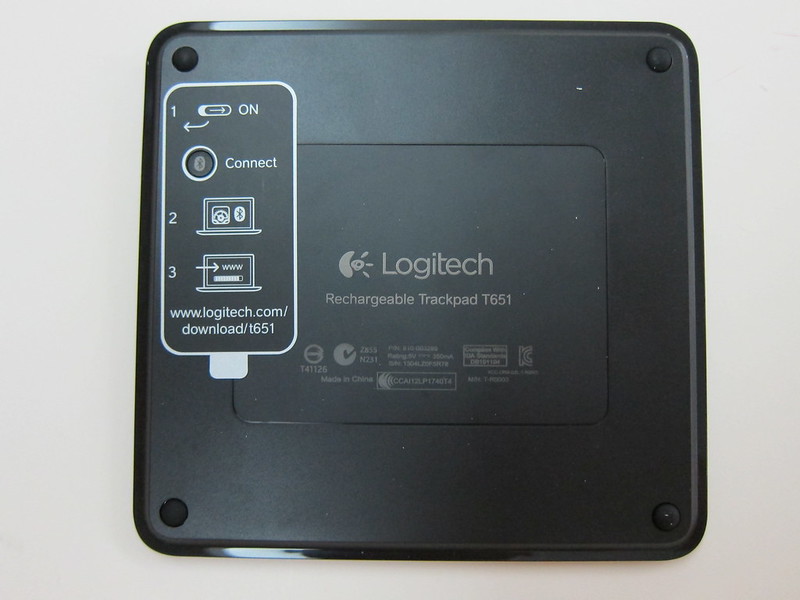 Don’t mistake personal preferences for design errors. The K811 is made of high quality aluminum and industrial trade plastics. It’s built like a tank. While this is specifically designed for Apple devices, PC and Android users aren’t left out. There’s another version of this keyboard, the K810, for those users. in fact, John P. just got one to use with the HP Z1 workstation we’re testing. Whether K810 or 811, the Logitech Easy Switch line should be your next keyboard. You can’t have it cheap though, both versions retail for a penny shy of $100. You can find it online cheaper, but even paying Logitech’s price, it’s worth every penny. The only reason to not buy is if you want a full featured keyboard with numberpad. If that’s the case, the K750 might be more your fare. You’ll lose the 3 device switching though.

If you think you’re having deja vu, you’re not crazy. Gord McLeod reviewed the PC version of this trackpad, the T650 back in March. The T651 has one other change beyond a color switch to a Mac-friendly silver, the connectivity type. Like I said earlier in the article, it uses Bluetooth. The T650 uses 2.4ghz and requires a USB dongle. The Mac version is $10 cheaper than the T650 at $69.99 opposed to $79.99. That also puts at exactly the same price point as Apple’s Magic Trackpad.

I have a MacBook with Apple’s newest trackpad and I’ve used the Magic Trackpad for two years. How does the Logitech compare? Very favorably. First off, it just works. The control panel mirrors Apple’s and it works as if Apple made it. Every gesture is identical. Compared to the Magic trackpad, I prefer the Logitech. It has a glass layer on top, like the MacBook trackpad, which allows for very smooth motion. The Magic Trackpad has a bit of resistance to it, more so when it starts to get dirty. If you’re wanting a Mac trackpad, this is the one to buy.

If you’re looking for a keyboard-trackpad set to pair with your Mac, the combo of the K811 and the T651 is hard to beat. At a combined $170, they’re not cheap, but the build quality and perfect Mac compatibility makes up for it. The K811 is also backlit and can pair to three different devices. The only real downside to either is that the K811 may better suit those with larger hands. With products like these, Logitech’s reign on the peripheral market won’t be coming to an end anytime soon.

Expensive
Not as comfortable for those with smaller hands