Moving Pictures Experts Group/Motion Pictures Experts Group (MPEG) is a popular format or playable standard format that be supported by many devices. MPEG is often used for creating movies that are distributed over the internet. MPEG movies are saved with .mpg or .mpeg extension. The very unique compression technology of MPEG brings its advantage of small size. When comparing with other audio and video formats, it has much smaller size but high quality.

MPEG files can be played on many popular media players, like Windows Media Player, Apple QuickTime Player and other movie players. It also can be supported by programs such as Windows, Mac OS X, Symbian OS, Android and more. If you have an .mpeg or .mpg extension file, you usually have either MPEG-2 or MPEG-1 video. MPEG-2 is used for DVD discs and Super VideoCD(SVCD), while MPEG-1 is for VideoCD discs(VCD). However, if you want to freely play your MPEG videos on different media players, you may need iSkysoft MPEG Video Converter to help you. With it, you can easily convert MPEG to AVI, MP4, FLV, etc. on Mac or Windows PC as you want.

After installing the program, please drag and drop the MPEG files to the MPEG Converter Mac program. Alternatively, go to the 'File' menu then choose 'Load Media Files' to import your MPEG videos.

As this software allows you to convert MPEG files to various formats, here you should set the output format as you need.

After setting the output format, please hit the 'Convert' button to convert your MPEG file to MP4, AVI, FLV, MOV without any quality loss. 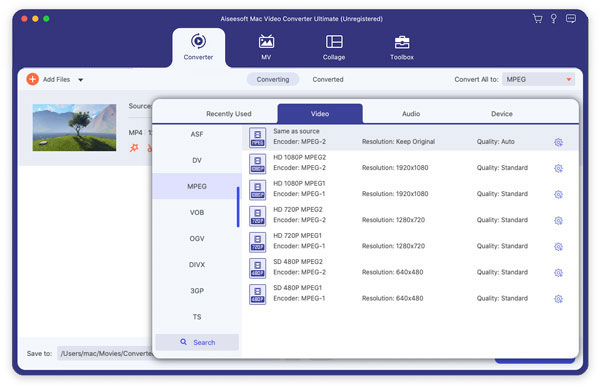 If you don't want to install a computer program, you can also try online video converter to convert your MPEG videos to any format as you want. Try it below:

Note: Because the online tool doesn't support 'https', so if the content below was blank, please manually click the 'Shield' icon on the right of your browser address bar to load the script. This action is secure without any harm to your data or computer.